Five-year-old girl fined for selling lemonade outside her house

The little girl was fined for not having a permit. © Stock Photo

A five-year-old girl has been fined £150 for selling jugs of lemonade outside her house.

Andre Spicer had helped his daughter make four jugs of lemonade and set up a stall at the end of their road.

The little girl charged 50p for a small glass or £1 for a large glass of the refreshing drink.

The stall was popular with people passing their road on their way to a music festival in a local park.

He described the incident when they were approached by enforcement officers from the local council in London.

"Excuse me", one officer said as he switched on a portable camera attached to his vest. He then read a lengthy legal statement – the gist of which was that because my daughter didn't have a trading permit, she would be fined £150. "But don’t worry, it is only £90 if it’s paid quickly", the officer added', Mr Spicer wrote in the Telegraph newspaper.

Mr. Spicer said his daughter burst into tears asking: “Have I done a bad thing?”

When her father suggested that they get a permit and start selling lemonade again, his daughter replied: “No. It’s too scary.”

The fine has since been cancelled by Tower Hamlets Council who apologised to Mr Spicer and his daughter saying that more common sense should have been used by their enforcement officers. 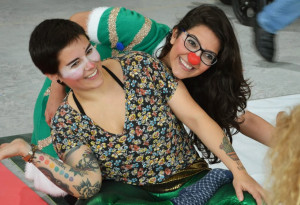 A New York Times quiz can locate where you are from

A New York Times quiz can locate where you are from